It is time for moderates to take back America from the hysterics and the screamers. We should judge policies by their usefulness, not by who advocates for them. I have seen studies showing that the same policies will be judged good or bad by partisans depending on their purported provenance. How about we just mix and match so that it gets hard to tell who had the “original” idea.
The good news is the raging moderates have been working on ideas on how to address some of the intractable problems of poverty and maybe more important the challenge of human dignity and I heard about three new books about work, money and human dignity.
The first speaker was Isabel Sawhill discussing her book “The Forgotten Americans: An Economic Agenda for a Divided Nation” (Yale University Press, 2018). I heard her earlier at Brookings. She started the same way by saying that she was shocked by the Trump victory and wanted to know why, so she got out of Washington to try to find out. He book is about the working class/poorer workers, which she defines as people w/o a college degree and earning less than the median income. These folks make up 38% of the workforce. Only about half of them are white, so we really cannot refer to them as the white working class.
Sawhill sees the need to combine what she calls “red state” values with “blue state” policies. The red state value she thinks is necessary is the commitment to hard work and personal responsibility. I understand that some liberals might object to this being called a red state value. Sawhill is herself a liberal. Liberals indeed believe in these things too, but often fear the touting them would lead to “blaming the victims.” This deprives the forgotten Americans of their agency.
Focus groups that Sawhill organized focus groups and found that the forgotten Americans feel under appreciated. They worked hard, often served our country and showed loyalty to their jobs but found little reciprocity. They are cynical about government, especially the federal government.
The “blue state” policy Sawhill advocates is a type of income support through the tax system. The people she talked to were not worried about getting jobs. The economy is working very well now to provide jobs to all who want them. But they are worried about not making enough money. Sawhill wants to boost take home pay by giving a tax credit to offset the payroll tax for the lowest third of workers. She wants to pay for this by upping the inheritance tax. If this is not possible politically, she would go with a carbon tax or VAT tax, anything that does not tax work, the way a payroll tax does.
Sawhill also advocates universal national service. This could be military service or other sorts of public service. The purpose is to mix the population and give young people some time to “find themselves.” I think this would be a good thing, especially for boys. Many kids are not mature enough to go to college when they are 18 and could make bad choices about careers. Better give them a “gap year”. The draft in the 1950s worked this way and of course so did the general service in World War II. She adds a permutation in that families could be encouraged to host a kid, much like we do with exchange students. There is much more to prosperity than just having money.
Oren Cass who wrote “The Once and Future Worker: A Vision for the Renewal of Work in America” (Encounter Books, 2018) emphasized the social and spiritual value of work. Work matters for a lot more than just money. In fact, giving people money w/o them doing something to earn it is corrupting to them and society.
He said that the idea that consumption is the key part of the equation is backward. In fact, production, making a good or providing a service is the more important part. He made a kind of radical statement that economic growth is more an emergent phenomenon that comes from good social and cultural conditions. He understands that this is a hard sell for policymakers, but says that employment is good and meaningful jobs, those that let people maintain their dignity, is more important than faster economic growth. Making is often better than having. 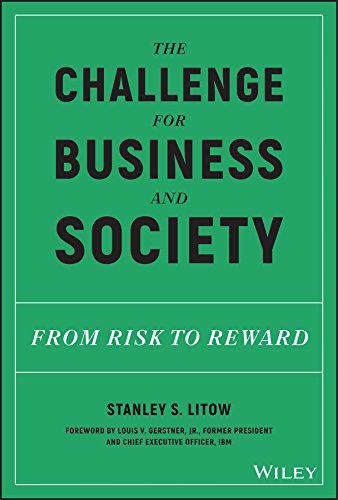 Last was “The Challenge for Business and Society: From Risk to Reward” by Stanley Litow (Wiley, 2018). He went through a useful history or what we would call progressivism, except that he was mostly talking about private enterprise. Macy’s pioneered health insurance for employees, for example, and American Express established a pension system in 1875. They did these things w/o the pressure of government action or the force of unions. Of course, he also talked about the nasty aspects of private enterprise. But the point he was making is that it was interactions between government, business and society that created and distributed wealth.
The firms that gave these benefits did not do this from a sense of charity, but rather a combination of what we would today call corporate social responsibility or enlightened self-interest. It helped the get and keep the best employees.
Anyway, I have the book “The Forgotten Americans”. Not sure if I will buy the others. I have literally a stack of books that I have been trying to push through.
The idea of the dignity of work and the new economy is a special interest of mine lately. I thought a lot about this – and still do – as a gentleman of leisure. In some ways I am part of the “gig economy” in that I work for State Department sometimes. In other ways, I am part of the non-profit, since I am on two non-profit boards. In part I am in the giving sector, since I contribute to non-profits. In part I am self-employed, since I run my forestry enterprise, but on bolstering all of this is a guaranteed base income, which is the key to security. I think this will be more like people in the future. We will need to find our own way and create our own lives. This is very exciting but also scary. I was, and sometimes still am, afraid that I would default into sleeping late and just watching bad TV. But it took me decades to develop the skills to be my own boss.
Hard to work for a tyrant like that.